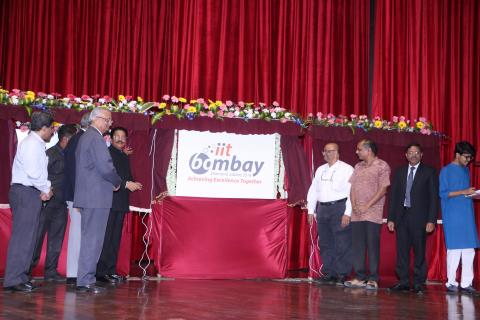 Indian Institute of Technology Bombay (IIT Bombay) celebrated its 59th Foundation Day today. The foundation stone for the internationally-recognized Institute was laid by Pandit Jawaharlal Nehru, then Prime Minister of India on March 10, 1959. IIT Bombay was the second IIT to be established in the country and the first one to be established with a foreign aid received from UNESCO. Since then, the Institute has grown from strength to strength and is now counted among the best engineering institutions across the globe.

The ceremony commenced with a welcome address by the Director of IIT Bombay Professor Devang Khakhar, highlighting key milestones achieved by the Institute in 59 years and announcing the beginning of Institute's Diamond Jubilee year (March 10, 2018 to March 10, 2019). Welcoming the guests, he said, “The biggest change in the Institute is the trend of faculty from different Departments collaborating to form large multidisciplinary centres to address particular areas. I am happy to announce that we have placed an order for a new supercomputer 'Space Time' that will provide a visible leap forward in our computer capabilities”. He also spoke about increased industry interactions, international engagements, entrepreneurship and increased alumni engagements.

On the occasion, the Chief Guest for the function, Honourable Governor of Maharashtra Shri CH. Vidyasagar Rao unveiled the plaque for new Guest House Padmavihar in the presence of the Guests of Honour Dr. Anil Kakodkar, Ex-Chairman, Board of Governors, IIT Bombay.

The fitting epitaph to (kick start) the Diamond Jubilee year was the release of Institute Postal Stamp and the Diamond Jubilee Logo by the Chief Guest Shri CH. Vidyasagar Rao at the function. In his inaugural address, Shri CH. Vidyasagar Rao said, “Like the 'Make In India', we must implement 'Teach In India' programme to associate best faculty with our institutions”.

Calling IIT Bombay the real diamond in the crown of India, the Chief Guest urged the Institute to prepare a road map for itself. A Nobel price for India long over-due, and if any institution can deliver it for India, it is IIT Bombay. It is necessary that research funding and student funding are enhanced substantially. Let IIT Bombay be the nucleus to facilitate a vibrant start-up ecosystem, he said.

The Institute celebrated 59th anniversary of its inception today by honouring its select alumni for their achievements in diverse fields ranging from academics, research and entrepreneurship. The 'Prof. S.C. Bhattacharya Award for Excellence in Research in Pure Sciences' and 'Prof. H.H. Mathur Award for Excellence in Research in Applied Sciences’ were given away by Shri CH. Vidyasagar Rao. Dr. Anil Kakodkar, Ex-Chairman, Board of Governors, IIT Bombay and the Guest of Honour for the function gave away the Distinguished Alumnus Awards and Young Alumnus Achiever Awards.

The Institute had long felt the need to recognize the alumni of IIT Bombay, who have excelled in their field of work and made the Institute proud. With this intention, the Distinguished Alumnus Awards (DAA) have been instituted. The awardees this year include:

The Young Alumni Achiever Awards (YAAA) are for alumni who have made outstanding achievements in their chosen field of work and are below 40 years of age. These awards were instituted in the year 2011. The awardees this year include:

Padmavihar is a new addition of guest house facilities to IIT Bombay. It has 88 twin rooms and 48 suite rooms. It has a large dining hall for about 280 guests, kitchen with modern equipments, mini dining hall and alumni lounge. As one of the green initiatives, it is equipped with a grey water tank for recycling water and solar water heating system.

• To represent the epitome of knowledge and to exude a sense of sophistication, a very subtle and effective perceptual shift ambigram is used for the Diamond Jubilee Celebrations logo. The characters in the circle indicates '60' while the consolidated word interprets ‘bombay’. Though the second letter ‘o’ is incomplete, closure occurs and viewers' perception completes the shape, making it memorable.

• The circular element at the begining and the “emerging circles” indicate technological advancement and gives an impression of celebration.

• Putting practical use of the understandings acquired at the university is reflected trough the tagline_ ‘Achieving Excellence Together’.

The logo is designed by Mr Shashidhar Reddy, alumnus of Industrial Design Centre, IIT Bombay and the tag line 'Achieving Excellence Together' is by Mr. Vikrant Raj, alumnus of Chemical Engineering, IIT Bombay .

Several events and activities are planned to celebrate IIT Bombay's Diamond Jubilee. The main events include this special Diamond Jubilee edition of the Foundation Day to kick off the events, and other hi-profile Institute events such as the Convocation Day in August 2018, which is expected to be graced by the Prime Minister. There will also be a Conclave of Vice Chancellor/University Presidents/MoU partners, and a black-tie city-side meeting with Industry and Government leaders. Internally, IIT Bombay's academic units and Departments will be having conferences to take stock of the current and future of education and research in their respective specializations, especially in light of IIT Bombay's newly-unveiled strategy document. IIT Bombay together with its extensive network of alumni are planning various events at four zonal cities in India and at several places abroad like in the USA, Singapore etc., where IIT Bombay's several alumni work and reside. A Ted-X event to discuss the standing of IIT Bombay in the public and social mileau is being planned. Several internal infrastructure and technology demonstrator projects are also planned new or fast-tracked to benefit campus residents, including an expansion of the creche, a new community center and art installations. An important stock-taking exercise will be the commissioning of a study to assess the economic and social impact that IIT Bombay has had over the last 60 years. The year-long celebrations will close with the Foundation Day event on March 10, 2019.