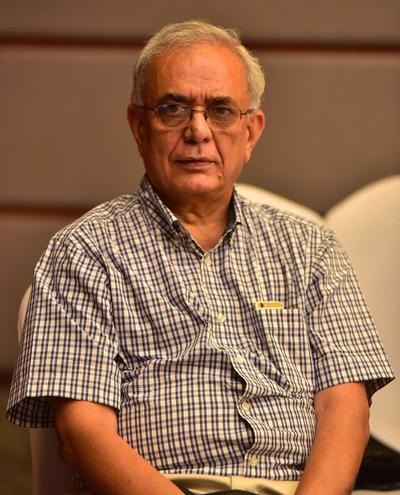 The Indian Institute of Technology Bombay organised an Institute Colloquium on Thursday, March 22, 2018 on Space Astronomy in India - Great Collaborative Opportunities for Scientists and Technologists by Prof. Ajit Kembhavi.

Indian Space Astronomy is now in a very exciting phase. AstroSat, the first Indian satellite wholly dedicated to astronomy is now in orbit, gathering data on cosmic objects X-ray and Ultraviolet wavelengths with unprecedented resolution and timing accuracy. The ADITYA L1 mission for observing the Sun from space is being readied. Plans are now being made for the next generation of space observatories, which can be very ambitious because of the greatly improved launch capabilities of ISRO. It is possible that over the coming decade more than one major space mission may be launched, together with a number of smaller mission which could piggy-back on missions in other domains. These missions present great opportunities for astronomers, engineers and technologists to work together to plan and design exciting missions, produce cutting edge instruments for detection and futuristic data centres for analysis and dissemination of the results.

Professor Ajit Kembhavi is Emeritus Professor and Raja Ramanna Fellow at the Inter-University Centre for Astronomy and Astrophysics (IUCAA), Pune. He was Director there until August 2015. He did his PhD from TIFR Mumbai and was a post-doctoral fellow at the Institute of Astronomy, Cambridge. Professor Kembhavi is a distinguished astronomer who works on galaxies, quasars and other extragalactic objects, various areas of high energy astrophysics and X-ray and radio pulsars. He has published a large number of research papers and several books. He is involved in many international collaborations and for several years been involved with the Thirty Metre Telescope (TMT) Project and the LIGO India projects. He is now on the Apex Committees of these projects. In the field of data driven science, Professor Kembhavi has led the Virtual Observatory-India project for fifteen years, which has made important contributions to data management, analysis, visualisation and the development of tools for statistical analysis. He now is head of a Big Data project supported by the National Knowledge Network (NKN). The project is a collaboration with the Regional Centre for Biotechnology and will bring together astronomers, biologists and software developers to adapt Virtual Observatory techniques to biological data. He was responsible for setting up the INFONET programme of UGC which provided Indian Universities with electronic access to scholarly journals. Professor Kembhavi was the Director of IUCAA until August 2015. Professor Kembhavi is Vice-Chairman of Advisory Committee of on Space Sciences (ADCOS, the apex advisory committee for ISRO) and has been a member of the Space Commission. Professor Kembhavi is Vice-President of the International Astronomical Union; former President, Astronomical Society of India and former President, Indian Association for General Relativity and Gravitation. He is Chairman of the office for Astronomy Development located in Cape Town, Chairman of the Governing Council of Indian Institute of Astrophysics, Bengaluru, and former Chairman and present Member of the Scientific Council of CDS, Strasbourg. He is a former President of the International Virtual Observatory Alliance and is Fellow of the Indian Academy of Sciences and the National Academy of Sciences, India.